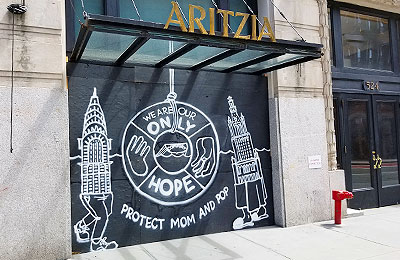 The Corona Virus has smacked down the world’s economy, kept everyone in lock down for months, and killed far too many people. New York is reopening thanks to our Governor watching the numbers and everyone following guidelines to keep us safe. We are in Phase 2 and Soho is coming back, along with the rest of New York.

After the death of George Floyd New York, along with the rest of the country peacefully protested for many causes reflecting the injustices that have been simmering for years, and never addressed. While New Yorkers walked in protests, organised gangs of mostly white men decided that Soho was ripe for looting. The looting was done in a systematic, organized way. Empty vans were parked on the streets and the ringleaders sent their troops out to pry off the boards on the stores and pillage them. Some were caught, some got away, but the damage was done. Soho is coming back more slowly than other areas, but stores are reopening. Some of the boards are still up, but they offer a taste of what Soho was like during the lock down, as stores encouraged street artists to use the boards to tell a story.

Aritzia had a Brooklyn based street artist, Steve Powers, also know as ESPO, cover their windows with a Covid-19 epic. Some of the boards were stolen and replaced, and the artist has actually sold most of them. This store, unhappily is not yet open, but when it is, the boards will live with their collectors.

All the sales people I met were so happy to be back, and are looking forward to seeing their customers again. The stores are spotless, and following all recommended guidelines. There were customers looking and buying, and some even had lines outside. Why not come on a tour of Soho, and if you live here, please come and see the stores and streets for yourselves. The community spirit is strong. Please continue to self distance and wear a mask out of consideration to others as well as yourself.

Soho has always had an artistic streak. Not many artists can afford to live here any more, but when Soho was rediscovered in the 70’s, it was the artists who claimed it. Not that many people live here, so many of the stores were boarded up, giving the neighborhood a somber feeling. Local artists changed that, and brought everyone together.

Bloomingdale’s was one of the first stores to open, and there were customers inside. They kept one of their colorful boards that had been up since early in the lock down. Marco Santini created walls of appreciation for the store. Nice that it is still here.

The John Varvatos store is not yet open, so the street art remains.

When I was down there, a team was getting ready to open the Louis Vuitton store. When a store has been closed for over three months, there is a lot of work to do. The store is currently open, and only a few shoppers at a time are allowed in the store. They are keeping things sane and safe.

The Loewe boutique is fully open, and has normal hours seven days a week. They were one of the first stores to prove that Soho is coming back. Their spring collection has amazing bags and clothing.

There was a long line at the Apple store. Everyone was happy to be able to get back into the store, and were waiting socially distanced.

Fanelli’s Cafe is a local landmark. There are now many more tables on the sidewalk, as New York City is helping restaurants survive by easing permits for out door dining all over the city.

Soho has always had many street vendors. It is part of what makes Soho special. They are starting to come back, and liven the street scene with clothing , jewelry and art.

This art gallery is not yet open, but it’s windows have some very touching displays.

French designer, Isabel Marant’s store was being stocked up with new merchandise, and is now open 6 days a week. Store hours vary from store to store, with some closing at 5, 6 or7 P.M.

There is a new normal, and this sounds like a nice one.

Gucci was opening up when I was there, and they are now open 7 days a week, The store was badly looted, as Gucci is one of the most desired brands. The staff is friendly and can’t wait to see you. The merchandise is all new since everything was taken, even stock in the basement.

Chloe is open too. There were boxes and boxes of new items being delivered to the boutique.

The Lacoste store is full of merchandise, but only the store in the Westfield Mall downtown is currently open. They should be opening soon.

Bape is a Japanese company that has very cool street wear. They are offering in-store pick up now, and maybe that’s a good idea. This is one of the stores in Soho that often has a line outside the store.

Ray Ban is still closed, but the boards are up and talking.

Faherty is a family owned company offering men’s and women’s clothing that is mindfully made. They are still doing curbside pickup, but hopefully will offer by appointment shopping soon. UNTUCKit. the men’s shirt company is open for business now.

Uniglo, a company that provides good basics at great prices is open for contactless pickup.

Flying Solo is a store that can only exist in New York. The store is operated by a collective of local designers. Clothing, shoes, bags, jewelry and more. It’s an interesting store to explore, Each designer has an assigned space, and sometimes you get to meet the designer. It is now open for shopping.

Ground Support is a popular stop for coffee and snacks. As New York is slowly opening up restaurants and cafes, stop by when you are in Soho.

The Coach store was also looted. They are doing curbside contactless pickup for now and hope to fully open soon.

If you are heading to the beach, Vilebrequin has swimwear and casual clothes to bring color and style to your summer.

One Kings Lane is not open yet, but it does make a statement.

Intermix is open. You can book an appointment, and have a dressing room reserved for you, The team can also do a virtual styling appointment with you and have items ready to pick up. Or just shop in the store, making sure that you are masked. They are taking all protocols seriously.

Fendi is back as well. This friendly boutique is looking forward to seeing both men and women.

This piece of street art is on the side of the Golden Goose boutique. They have just reopened, and are full of lots of great things.

The Celine store in Soho is still closed, but the Madison Avenue boutique is open The store has a lot of windows, and plenty of statement art.

The boards are now off the Alice and Olivia store, and they were unpacking boxes of new merchandise when I was in the boutique

Balenciaga is not open just yet, but the boutique on Madison Avenue is .

Dreems is another store that is a designer collective. There are many designers represented here from all over the world. Both clothing and accessories are featured, including fun hats, bags, shoes and more

Dolce & Gabbana is still closed in Soho, but again the uptown store is open for business now.

The Kendra Scott jewelry store is not open yet, but their boards are interesting.

Sadly, some brands do not seem to be supporting New York. Nike is a huge corporation, and their stores are popular with New Yorkers as well as tourists. The security guards they hired said that the store was not opening until August because it was too big to clean and stock. None of their New York stores are open. Really? Bloomingdale’s is bigger than Nike and they are open. Stores like Saks, Nordstrom and Macy’s located in midtown are open, and they are much larger stores. They managed to do it. What’s wrong with Nike? And why do they need a security guard? There is nothing in the store.

Soho is reopening as New York is as well. Reopening is harder than closing up. All these businesses have suffered during the pandemic, as has everyone. Businesses large and small need your support now more than ever. They are all working hard to provide safe environments for shopping. And after being cooped up for so long, it is really nice to be able to go back into a physical store.